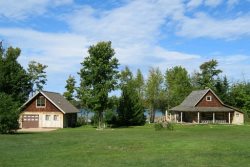 Property includes BOTH a home and a separate housing in a loft!

The Traverse City Film Festival has grown to become one of the largest film festivals in the Midwest. It has grown to become one of the most respected film festivals in the country. We are commited to one thing - Just great movies! Emphasis is on foriegn, American Independent film makers and documentaries. Over 100 movies were presented at the 2010 festival. Movies can also be seen down by the bay on an inflatable movie screen! The 7th annual event takes place July 26 - July 31, 2011. For more information visit www.traversecityfilmfest.org

Jump to a Rental